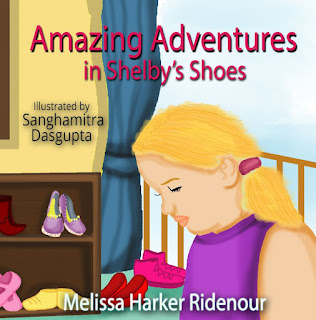 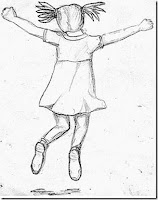 “Like star dust glistening on fairies' wings, little girls dreams are of magical things.” This quote, credited to Sherry Larson, effectively reflects one of the main themes of my new children’s book Amazing Adventures in Shelby’s Shoes, being marketed to grades K – 3. The book also has the theme of empowerment for girls, as well as boys.It includes glossary and a researched chapter called "Girl Power" at the end of the book.

In the book, a little girl's imagination takes her all over the world as she plays dress-up, but she comes to realize she can be, in reality, anything she wants to be if she really tries. The book is a charming rhyming narrative with a non-fiction chapter of information, references and links about Girl-power and empowering children, especially girls, to realize their full potential and reach for the stars – to “shatter that glass ceiling.” It is beautifully illustrated in vivid color by illustrator, Veronica Castle.

Published by Crimson Cloak Publishing in March 2017, Amazing Adventures in Shelby’s Shoes is available in paperback and e-book formats through thousands of retailers, libraries, and Internet commerce companies in North America, the U.K. and Europe, Australia, and New Zealand, including, but not limited to, Amazon, Barnes & Noble, Books-a-Million, Ingram, EBSCO, Chapters/Indigo (Canada), and Apple.

In the book, the reader will meet a charming and imaginative little girl named Shelby. Shelby, while playing make-believe, imagined herself doing all kinds of daring things, going to all kinds of exciting places, and being all kinds of famous and important people. But while Shelby had fun with her make-believe adventures, she really knew that those were only fun and imaginative journeys. She really knew that she could have the power to be any kind of person she wanted to be, travel anywhere she wanted to go, and do anything she wanted to do, if she believed in herself. Shelby knew she could do such things if she tried really hard, dreamed really big, and if she always reached for the stars.

The "Girl Power" chapter at the end of the book demonstrates to little girls, as well as their parents, that, in order to have girl power, it is important to learn a bit about the journey that girls and women have been on over the years trying to get equal rights with boys and men. It is also important to understand that the journey has not yet ended. The path to equal rights and empowerment for girls and women is a long and difficult one. Getting there requires strength, determination, courage, and never giving up. The "Girl Power" chapter provides the inspiration, the motivation, and the strategies for reaching for the stars and achieving goals and dreams.

Because of its relevance to the theme of empowerment for girls and women to realize their full potential, strive to reach their goals and dreams and to shatter that glass ceiling,  I am including in this blog post a poem by Margarita Engle. Read and enjoy:

Books are door-shaped
portals
carrying me
across oceans
and centuries,
helping me feel
less alone.

But my mother believes
that girls who read too much
are unladylike
and ugly,
so my father's books are locked
in a clear glass cabinet. I gaze
at enticing covers
and mysterious titles,
but I am rarely permitted
to touch
the enchantment
of words.

Poems.
Stories.
Plays.
All are forbidden.
Girls are not supposed to think,
but as soon as my eager mind
begins to race, free thoughts
rush in
to replace
the trapped ones.

Secretly, I open
an invisible book in my mind,
and I step
through its magical door-shape
into a universe
of dangerous villains
and breathtaking heroes.

Many of the heroes are men
and boys, but some are girls
so tall
strong
and clever
that they rescue other children
from monsters.

Research, in addition to personal experiences of girls and boys, and men and women (especially the experiences of girls and women), show that gender stereotypes have been in the past and, unfortunately, even in 2017, are alive and flourishing. Therefore, it is the responsibility of parents to attempt to raise strong girls who feel empowered to follow their dreams, despite any obstacles that society might impose. Below are six important things that parents must try to do empower girls and to stave off the gender stereotypes.  ● Know that, as parents, you are your child’s first teacher.    Parents are role models .   Your daughters and sons are watching and learning from everything you do and say.   If you say one thing (boys and girls are equal) but do another (treat them differently, or act in a gender-stereotypical way yourself), they will definitely notice the actions over any empty words. ● Introduce diversity in toys, play and sports activites , and
Read more

The goal of my books, Amazing Adventures in Shelby’s Shoes, is to promote self-esteem and to encourage all girls to realize their full potential and strive to achieve their goals and dreams. However, there are some girls, unfortunately, despite best efforts, fall through the cracks. These are at risk girls. To help educate about and further the cause for helping at risk girls to achieve their full potential, I want to introduce a program created by Girl Power Rocks Girl Power is a nonprofit prevention and intervention social change program that is promoting positive behavior, improving social skills and enhancing academic performance in at-risk girls ages 11 – 17 who are, for sundry reasons, at risk. The organization was established in 2000 by the World Literacy Crusade (WLC) of Florida - an international, non-profit, community literacy program - Girl Power fosters confidence, competence, and pride in at risk girls who may suffer from low self-team, lack of educational oppo
Read more